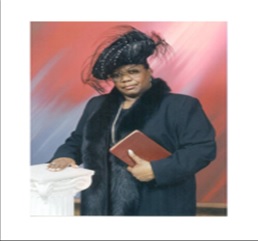 Elder Claudine Phillips was a pioneer and trendsetter whose ministry spanned over 30 years. She was an anointed pastor, preacher, prophetess, and psalmist. She was the founder and Pastor of the Abiding Presence of God Church.

Early Church Life
Elder Phillips began her early church life at the historic Garden of Prayer Church of God in Christ, under the leadership of the late Bishop Benjamin Dabney and Mother Elizabeth Juanita Dabney and remained a member for over (25) twenty-five years.

Elder Phillips later joined the Ark Revival Center in the early seventies under the leadership of the late Rev. James Harris, and served there in many capacities from devotional leader to secretary to custodian and where else she was assigned.

The Lord placed a calling on her life, and while she was a member of the Rehoboth Temple Church of God in Christ, under the leadership of Bishop George A. Williams, she accepted her call to preach and she preached her initial sermon in July 1985.

In 1986 Elder Phillips went and joined the United Bethel Full Gospel Church in Camden, New Jersey of Elder Pete Hamm, and there she was ordained and served as the Assistant Pastor.

The Birth of the Ministry and Beyond
After fasting and praying, the Lord directed her to start her own church and so on Mother’s Day, May 1987 she founded the Abiding Presence of God Prayer and Faith Ministry, where she pastored for nearly 30 years.

In 2001, Elder Phillips became the first presiding Elder in the Sixty-year history of the Church of Christ Written in Heaven. She presided over the Philadelphia/Wilmington District for over (14) fourteen years and was appointed to serve on the National Presbyterian Board of the church.

Radio Ministry
Elder Philips started radio broadcasting with a weekly live call in prayer request line on radio station W.D.A.S. in Philadelphia, Pa. Then later moved to W.T.M.R. 800 AM Radio in Camden, New Jersey and remained on the air for over 16 years with an hour and forty-five minutes. Many thousands of lives have been saved, delivered and set free though this broadcast.

Education
Elder Phillips graduated on June 29, 2007 with a diploma in biblical studies, with a certified teacher’s certificate. She was scheduled to enroll in the Thomas Brown College and seminary in Jacksonville, Florida to earn her Bachelor’s degree in Ministry.

Outreach Ministry
Elder Phillips lead Abiding Presence of God Church into outreach ministry. The church had been actively involved in the neighborhood of the Logan community of Philadelphia with various events such as Octoberfest, Acquire the Fire, Walk for Peace, and Back to School Jam give a ways, afterschool programs which involved reading, tutoring and homework help.

Elder Phillips also served as an administrator for “It’s Not Your Fault” A Nonprofit organization.

World Renown Prayer Ministry
Elder Phillips was a great woman of prayer. She began a 4 A.M. prayer altar that she kept faithfully for over (25) twenty-five years. This 4 A.M. was visited by hundreds throughout the years and was known throughout the world for its consistency, power, and anointing. She recently started a morning prayer line from 6:00 to 7:00 A.M. Monday through Friday.

Her legacy continues through her Ministry, The Abiding Presence of God International World Prayer Center.